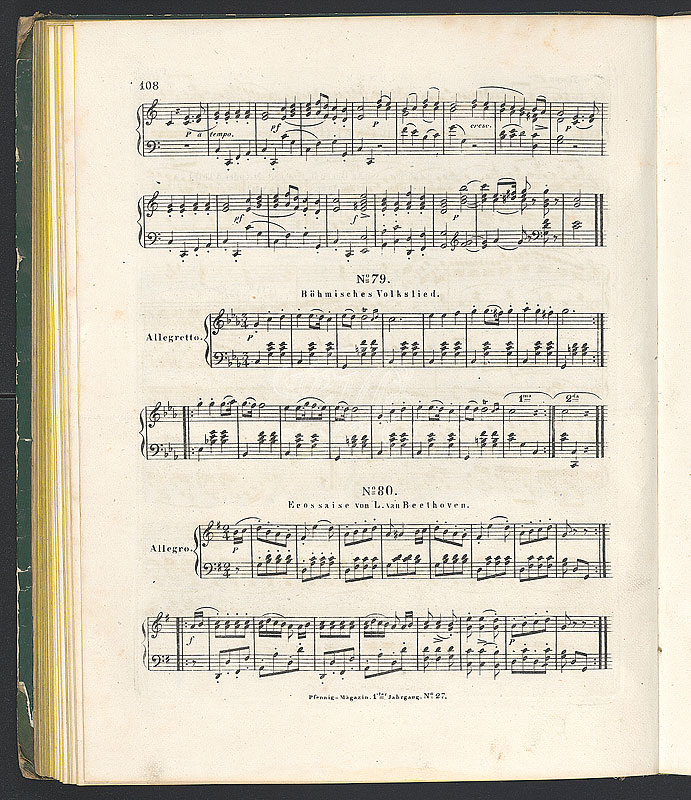 In 1807, Beethoven composed a little March (WoO 29) for two clarinets, two horns and two bassoons for Prince Esterhazy in connection with his trip to Eisenstadt in September 1807. Beginning in 1809, the Beethoven marches for band appear. The first, a March in F (WoO 18) was composed "for his Royal Highness Archduke Anton, 1809." Additional marches for band appear in 1810. The first was another March in F composed "for his Royal Highness Archduke Anton, 1810, Baden, on the 3rd Summer month." This march (WoO 19) and the March in F were performed at the tournament at Laxenburg held on August 25, 1810, in honor of the birthday of Empress Maria Ludovica. In this year, Beethoven also composed the Ecossaise in D (WoO 22); Ecossaise in G (WoO 23 - not in the collected works); Polonaise in D (WoO 21); and the March in C WoO 20); all for military band.

The final known march that Beethoven composed is the March (WoO 24) of 1816. This was in response to a request from lieutenant Commander Franz Xaver Embel of the Civil Artillery Corps asking Beethoven for a "March of Turkish Music." In the final months of his life, Beethoven still hoped to compose future wind compositions. In December 1826, he spoke with Adolf Schesinger about some military marches which he intended to compose for the Royal Band of the King of Prussia. Unfortunately he did not live to compose any additional works.